According to the Times (subscription required), Manchester United are prepared to swoop in and snatch Donny van de Beek from Real Madrid’s grasp.

The Times claim that the attacking midfielder has partially agreed to join Los Blancos in a €55m (£49m) deal, but the ace is concerned that Zinedine Zidane’s side may not be able to seal a deal this summer due to the financial impacts of the Coronavirus pandemic on La Liga.

It’s suggested that United are now ‘seriously’ exploring a move for Van de Beek, with chief Ed Woodward eyeing a deal for a cut-price fee of £36m (€40m).

It would be interesting to see whether Ajax would consider such a bid, especially considering that Edwin van der Sar made it clear that the side wouldn’t be offering discounts for any talents, according to Football Espana via AS. 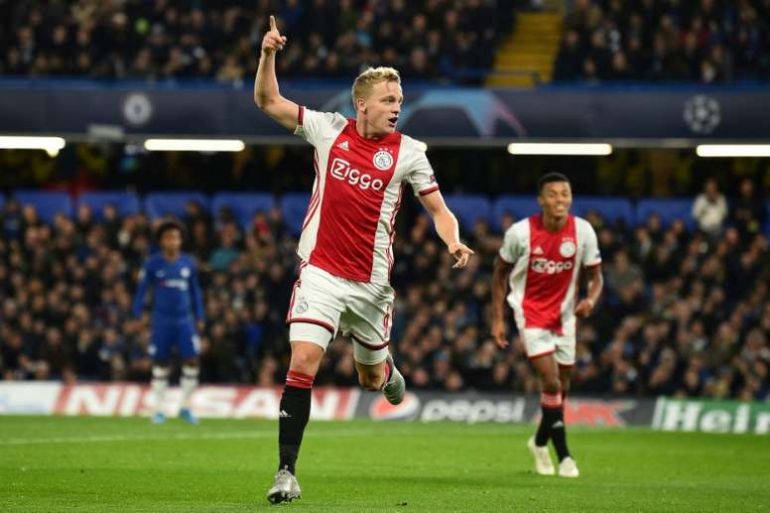 The Red Devils’ hopes to land the 23-year-old aren’t just some rumour, United legend and current Ajax chief confirmed the side’s interest in the ace earlier, according to the Metro via NOS.

With the Times hinting that the Netherlands international is keen on a summer exit, following in the footsteps of teammate Hakim Ziyech who has agreed to join Chelsea, United could be perfect suitors.

Van de Beek was a key figure in the Ajax side that completed the domestic double and defied the odds to reach the semi-finals of the Champions League last season.

The tireless has continued his fine form this season, contributing 10 goals and 11 assists for the Amsterdam outfit in 37 appearances across all competitions.

Ole Gunnar Solskjaer’s side captured themselves a much-needed attacking spark in January with Bruno Fernandes, Van de Beek’s potential addition would make their midfield extremely hard to contend with.

Van de Beek would not be threatening Fernandes’ place in the lineup at all, the Dutchman can flourish in either attacking midfield or as a more traditional central midfielder.

The ace could actually form a devastating one-two punch combo if he’s played behind Fernandes alongside either Fred, Paul Pogba or Scott McTominay.

A considerable amount of Van de Beek’s goals come from when the ace puts his unmatched work-rate to use by making darting runs into the box from a deeper midfield position.

The 23-year-old has also won nine caps for the Netherlands, the ace seems primed to play a key role for Ronald Koeman’s side in next summer’s delayed European Championships.

Given Van de Beek’s age, he represents a perfect mix of top-level experience whilst also having the potential to become one of the best in his position in Europe over the next couple of years.

The Dutchman and someone like Bruno Fernandes would be incredibly hard for opposition defences to keep up with, both are equally potent when it comes to scoring and creating goalscoring opportunities.

Finally, the Red Devils need to make the most of the chance that they have now, by using the apparent delay in proceedings with Real Madrid to push forward and snatch Van de Beek.

United would be best off acting quickly, to ensure that Los Blancos don’t have another chance of luring the ace to the Spanish capital.