Former Arsenal player Ray Parlour has issued a warning to the club regarding star striker Pierre-Emerick Aubameyang, according to a recent report in the Daily Mirror.

Speculation surrounding Gabon striker Aubameyang’s future at the Emirates has been growing in recent months, with several reports linking the player to a move away.

The Gunners now face the dilemma of keeping their star striker for another season and watching him leave for another club after his contract expires in 2021 or cashing in on him this summer before he becomes a free agent.

This conundrum will play out only if the Gabon international doesn’t sign a new contract at the Emirates and the player is yet to renew his deal at Arsenal, as things stand.

Now, according to former Arsenal great Ray Parlour, the club have to make a decision on the future of Aubameyang.

Speaking to Talk Sport about Aubameyang’s situation at Arsenal and their bid for a top-four finish, as cited in the Daily Mirror, Parlour said:

“If they [Arsenal] can come back and hit the ground running and get a good start to the season, obviously the Man City game is going to be very important, if they can get anything out of that game that will give them a lot of confidence going forward,” he is quoted as saying.

“Champions League football is so important for a lot of players these days so Aubameyang if they can squeeze in there, might sign a new contract, I don’t know.

“If they don’t, then he might be on his way and suddenly you’ve got to replace a striker who scores all your goals.

“I think you’ve got to sell him if he doesn’t sign a contract, and then take the money and try to replace him.

“It’s really difficult to keep a player if he doesn’t want to stay.

“It’s a big decision to make, but I don’t know what sort of money you could get for him if he doesn’t want to stay.

“That is the big decision the club have got to make, but hopefully he stays,” Parlour added.

The 30-year-old Gabonese striker has scored 61 goals in 97 games for Arsenal so far and only time will tell if he remains at the club.

While the Gunners will hope that their talismanic captain renews his contract at the Emirates so that they don’t lose out on him this summer or the next. 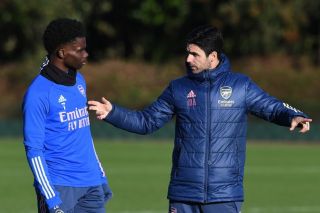 Arsenal encouraged to cut transfer cost of key £60m target in half with inclusion of talent in player-plus-cash deal June 21, 2021 15:42
Arsenal FC