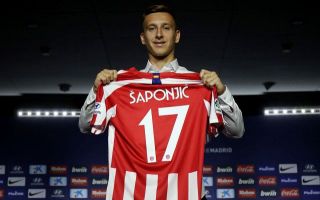 Spain was very badly hit by the coronavirus so it’s understandable that the football clubs are taking every possible precaution with La Liga due to restart in the next couple of weeks.

It’s a tough one for the authorities because the fans will be desperate to have football back as a distraction, but if something goes wrong and a players end up contracting the disease by playing it will be a nightmare.

Marca have reported on a few Serbian players who recently met up for a barbecue, and it sounds like Atletico Madrid have had to take drastic action with Ivan Saponjic.

It’s reported that he met Real Madrid striker Luka Jovic and Getafe midfielder Nemanja Maksimovic on Sunday, and Atleti have taken advice from La Liga and have kept Saponjic separate from the squad for now.

It must be stressed that the striker hasn’t actually done anything wrong, but the report says that Atleti have decided to be extra cautious until they receive his test results.

It might sounds over the top and it’s not clear if Real Madrid and Getafe are doing the same with their players, but it’s better to be safe than sorry.