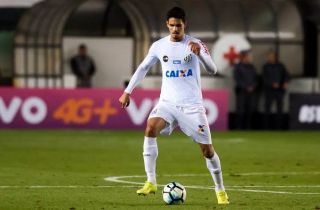 Chelsea have been linked with a move for Santos defender Lucas Verissimo as Frank Lampard may look to shore things up at the back this summer too.

In 29 Premier League games so far this season, the Blues have conceded 39 goals. That’s enough to give them the second-worst defensive record of the top 11 sides in the standings.

With that in mind, it’s surely an area in which they will try to improve as it’s nowhere near the standard set at the top of the table, and it appears as though they are being linked with swoop in Brazil.

As noted by the Express, via Globo Esporte, Chelsea are specifically named as an interested party in the 24-year-old, along with Sampdoria, Atalanta and Inter.

However, Santos president Jose Carlos Peres has insisted that he will not approve of an exit for less than €10m, (£8.8m), and so it remains to be seen if that’s a deal that Chelsea are keen to pursue.

Verissimo has come through the ranks with the Brazilian outfit and has gone on to make over 100 appearances for the club. In turn, it appears as though he is at the right stage in his career to take a new challenge, as he has gained plenty of experience and maturity through his development in his homeland.

That said, it’s still a risk if Chelsea do decide that he might be a solution in defence for them, as he will need to adapt to life in England and adjust to the Premier League, and so the Blues scouting team will need to be confident that he has all the right attributes to succeed at Stamford Bridge if they do launch a bid.

Chelsea already officially announced a deal in February to sign Hakim Ziyech from Ajax this summer, while Sky Sports reported last week that they have an agreement in principle for Timo Werner.

While that would add more firepower to Lampard’s squad, the statistics noted above show that he needs to also improve at the back, with more competition and quality needed to push the likes of Antonio Rudiger, Andreas Christensen, Kurt Zouma and Fikayo Tomori, or perhaps even replace them.