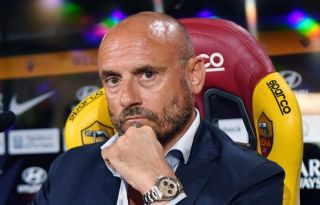 Roma sporting director Gianluca Petrachi has reiterated that the club are hopeful of extending their deals for both Chris Smalling and Henrikh Mkhitaryan, even beyond this season.

Both players have been a success with the Giallorossi so far this season as the Serie A campaign will restart later this month, as they’ve helped them remain in contention for a Champions League qualification spot.

Man Utd loanee Smalling has made 28 appearances and has established himself as a key figure at the back for the Italian giants, while although Arsenal ace Mkhitaryan suffered an injury setback, he has still managed six goals and four assists in 20 outings.

With that in mind, it’s no surprise then that Roma want to keep the pair at the Stadio Olimpico for the reminder of this current season at least, and Petrachi has reiterated that desire below while also insisting that the two players in question are also keen to stay and see out the season.

“The players we have on loan are very happy here with us,” he told Sky Sport Italia journalist Gianluca Di Marzio. “Mkhitaryan, Smalling and Kalinic were starters with the exception of the latter who found less space. Now we have to wait, understand how the situation evolves and consequently manage everything. I have a daily relationship with my boys, I am quite confident that they want to end the season with us and not return to the base at the end of the loan.”

While that covered his desire to see them stay and see out the current campaign which has of course been pushed back due to the coronavirus pandemic, he also insisted that he wants to find agreements to keep them next season too.

“The numbers prove that they were two successful loans,” he added. “Unfortunately with Mkhitaryan we lost him for some time due to physical problems, but he is very well, as is Smalling. We will do everything to keep the two boys, especially given their will to stay here. If we will succeed or not, we will see this later, but I feel I have the support of the two boys.”

Man Utd and Arsenal will undoubtedly have a big say in whether or not deals are extended, particularly next season, although given the competition for places and perhaps the threat of having a lesser role back with the Premier League clubs, both Smalling and Mkhitaryan could be tempted to stay and continue to enjoy regular playing time in Rome.

Time will tell how the situation plays out just as Petrachi notes, but ultimately it would come as no surprise if Roma come to an agreement with both Man Utd and Arsenal which will allow the pair to remain until August at least.