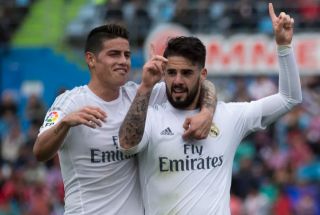 It’s expected that most teams will want to cut their squad size over the next year or two, so there could be a lot of interest in some fringe players.

While some reports might claim that the biggest sides will sell a lot of fringe players for high prices to finance signings of their own, the reality does appear to be different.

It actually sounds like some teams will happily take a low offer just to get some players off the books, and it could be good news for Man United when it comes to James Rodriguez.

READ MORE: Man United friendly called off at the last minute due to positive Coronavirus test

A report from Football-Espana has looked at the Colombian’s future, and it suggests that United could have the chance to sign him for a low fee.

Unfortunately there’s no indication over how much he might actually cost, but they do quote The Sun in saying that it won’t affect their budget when it comes to completing other deals too.

The presence of Paul Pogba and Bruno Fernandes does make it likely that he would be forced wide where he could get lost, but it would be interesting to see what kind of impact he could have on the team.

He only played seven times in La Liga last season so it’s clear that he’s not needed in Madrid, so this could be a transfer that makes sense for everyone involved.