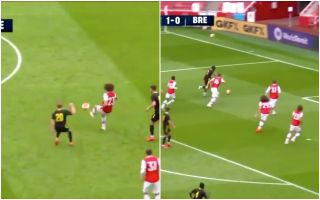 In the second-half of today’s friendly between Arsenal and Brentford, the Championship side equalised after David Luiz’s attempt to dribble into the opposition’s half were punished.

Ball-playing centre-back nicely flicked the ball over a Brentford player’s head, however the Brazilian’s trickery – the ball floating in the air – allowed another Bees ace to regain ground and win the ball back.

Brentford charged forward with Shandon Baptiste laying the ball off to Fosu, Baptiste’s clever dribbling left Sokratis on the floor, Fosu then had enough time to skip into the box and fire the ball into the net.

Take a look at Arsenal being punished for their unconvincing defending below:

Mikel Arteta will surely have to focus on trying to iron out his side’s defensive weaknesses before they return to action against Manchester City next week.

If Brentford, who sit 4th in the Championship can punish the Gunners like this, imagine what Pep Guardiola’s team will do if similar mistakes are made.