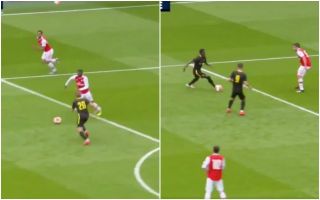 In the late stages of today’s friendly encounter between Arsenal and Brentford at the Emirates Stadium, Ainsley Maitland-Niles was punished for an error that ultimately cost the Gunners the game.

After one of his teammate’s made a brilliant tackle, the versatile ace took a horror first touch, which allowed Jan Žamb?rek to win the ball back for the Bees on the edge of the box.

The ball spilled into Shandon Baptiste’s path and the attacker remained composed before curling a brilliant strike into the back of the net to seal a 3-2 win for his side.

Take a look at Brentford capitalising on a mistake to score the winning goal below:

Maitland-Niles wasn’t the only player who made a crucial mistake in his own half today, although he did make the one that cost Arsenal the game.

David Luiz was also punished after attempting to dribble his way out of his own half.

Mikel Arteta will surely have to focus on trying to iron out his side’s defensive weaknesses before they return to action against Manchester City next week.

If Brentford, who sit 4th in the Championship can punish the Gunners like this, imagine what Pep Guardiola’s team will do if similar mistakes are made.