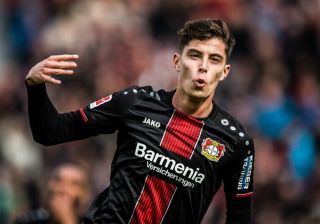 Chelsea might not be getting things all their own way as they pursue a sensational £75m capture of German wunderkind, Kai Havertz.

The Bayer Leverkusen front man has been in irresistible form since the return of the Bundesliga, carrying on where he left off before the lockdown curtailed the 2019/20 season.

Though the west Londoners lead a queue of potential suitors, Leverkusen’s sporting director, Rudi Voller, believes that they can still hang on to Havertz.

“We haven’t given up hope that he’ll stay with us,” he told ARD and cited by Goal.com.

“We try to give him every possibility that he can call up his qualities. He made that outstanding in the second half of the season.”

At just 20 years of age, it’s abundantly clear that Havertz has the brightest of futures in the game.

The question is whether he sees his immediate future with his current employers, or whether a move abroad, perhaps to the Premier League, will enhance his credentials, both at club and international level.