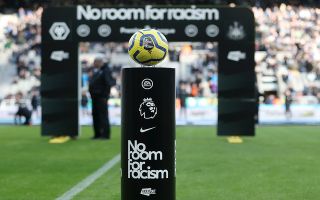 According to the Athletic’s David Ornstein, Premier League clubs have decided that ‘Black Lives Matter’ will replace player names on the back of the shirts for the first round of top-flight fixtures when it returns after a hiatus due to the Coronavirus pandemic next week.

Ornstein adds that Premier League clubs have also agreed to have a ‘Black Lives Matter’ and NHS badge on the front of shirts.

This gesture is bound to draw the world’s attention to the injustice that black people face across the globe, it’s a wonderful decision and we wonder if at least the badge can stay on shirts for the foreseeable future.

Premier League clubs also agreed a #BlackLivesMatter badge will be displayed on the front of matchday shirts alongside an #NHS badge. For the 1st round of games, player names will be removed from the back of shirts & replaced with Black Lives Matter #ProjectRestart @TheAthleticUK https://t.co/hRHkcB6bQN

This can act as a starting point for the Premier League as they hopefully look to combat racism in its member clubs’ communities, as well as within the sport.

In my opinion, the top-flight have needed to make such a move – one that is bold and clear for the whole world to see, for some time now as previous measures have struggled to combat racism within football.

Whether that be in regards to a lack of opportunities for BAME coaches and managers, stamping out racial abuse at stadiums and also the treatment of players from minority backgrounds in the media.