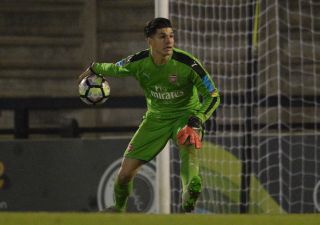 It’s never good news for a club when a talented youngster leaves them, but it usually takes years to discover if it was a bad decision to let them go.

Portuguese goalkeeper Pedro Virginia won’t be well known to the Arsenal fans at this point, he’s only 16 but it does sound like he’s been impressing at youth level for club and country.

Unfortunately they won’t get the chance to follow his development any further at The Emirates after Portuguese outlet Record confirmed he’s agreed to return to Portugal to sign for Porto.

READ MORE: Arsenal could raise £27m by selling injury prone star as Serie A side prepare a bid

They indicate that he’s been at Arsenal for four years and is expected to go into Porto’s U17 team next season, and it’s obvious that he’s delighted with the move:

“It was a very good experience in England. It was four great years with a great team, but now I came to FC Porto, a super team, one of the best in Europe, and I am very happy,”

“The scouts have been following me for eight years now and it was a dream of mine for a long time. The collective goals are to win as many competitions in training and the individual goal is to play at Estádio do Dragão.”

Premier League fans will be used to seeing their club poach young talent from abroad and not the other way round, so it’s hard to tell what to make of this.

Realistically he was never going to be part of the first team picture for a few years, but it’s not a good sign when talented youngsters are leaving the club.