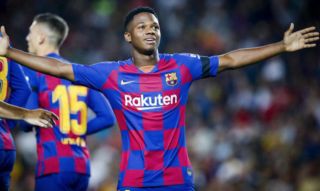 Although Barcelona are famous for having a long standing tradition where the academy players get every chance to make the first team, that hasn’t been the case in recent years.

January seems to show the perfect example, where they allowed Carles Perez and Abel Ruiz to leave the club only to then panic and throw money at Martin Braithwaite.

Ansu Fati is the only recent graduate who looks like he has a real chance of becoming a star for the senior team, so it’s understandable that they don’t want to let him go.

READ MORE: Journalist claims Man United will miss out on starlet this summer after he chooses to join Borussia Dortmund

Sport recently spoke to Barca Director Xavier Vilajoana about a variety of topics, but the interest from Man United in Fati came up.

His answer shows that they don’t have any intention of letting him go, and it does suggest they might be looking to use the academy players more in the upcoming years:

“For us, there’s no story with Ansu, we have never spoken about selling him. We won’t use players from the academy to make cash. In principle, we have no intention of selling the players we believe will make the first team.”

Recent transfer windows have seen them focus on spending big money on established players, and it means they now have an ageing squad that will need to be overhauled.

If they are struggling financially then that means the academy is a natural place to look for talent, and it would be good to see more youngsters breaking through in the next few years.