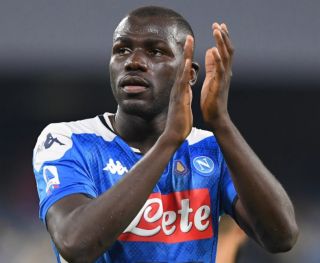 Ahead of the return of the Premier League, Manchester United have been offered some hope of signing one of their summer targets, Kalidou Koulibaly, for a cut-price €70m.

The commanding centre-back is sure to be much sought after if Napoli acknowledge that he will be available, and whilst it was originally thought that the Partnopei wouldn’t entertain bids under €100m, journalist Fabio Santini believes he will be available for much less than that.

“Kalidou Koulibaly has an evaluation of €100m, or will it fall after the crisis generated by the coronavirus?” Santini said on Marte Live Sport and cited by the Daily Star.

“Aurelio De Laurentiis knows how to do business and make the most of the teams he has available, also in terms of sales. Gennaro Gattuso is a very strong coach and can be an added value.

“The moment there is a Manchester United or a PSG that arrives with €70m cash and a quid pro quo, at that point, perhaps, Napoli will sit down at a table to talk about it.

“Let’s look at the reality of things: Koulibaly is valued €70m cash by De Laurentiis? Then come forward, if you have it, and we’ll talk about it.”

Alongside Harry Maguire, Koulibaly would help provide a fearsome pairing at the heart of United’s back line, and will surely give Ole Gunnar Solskjaer’s side some security and balance where they need it most. Strong in the air and in the tackle, he’s a leader who always puts in a shift.

Currently sat in sixth position in Serie A, Gennaro Gattuso’s side are well off of the pace as far as Champions League qualification is concerned.

If they’re unable to secure a place in next season’s competition, then the likelihood of the Italian club putting Koulibaly up for sale increases, and at that point, United have to make sure they’re in the box seat for his services.

Particularly if they’re able to procure him at the lower end of the scale in terms of price.