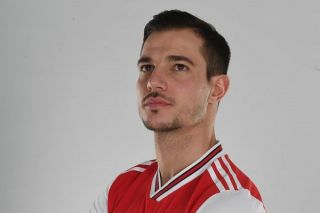 Admittedly there are plenty of extenuating circumstances around this one, but it’s a truly awful look all round if a player leaves a club without ever making it onto the pitch.

Cedric Soares joined Arsenal on loan from Southampton in January, and he looked like a solid if somewhat unspectacular addition to the back line.

He’s got Premier League experience and can be exciting going forward, so he must’ve been excited to show what he could do with the Premier League set to return.

READ MORE: Arsenal youngster secures his “dream” move back to his homeland

Unfortunately there’s a big problem with that, after Goal.com reported that extension talks between Arsenal and Southampton had stalled.

They report that he was actually signed with an injury, but that wasn’t expected to keep him out for too long. His bad luck has continued after they suggest he’s picked up an injury in training that will keep him out for the rest of the month.

His loan spell runs out at the end of this month and an extension hasn’t been agreed, while the report also points out that he’s set to become a free agent this summer, so he might not want to sign a short term extension in case he gets injured.

It’s not all Arsenal’s fault that the loan spell has gone so wrong, but it’s still been a disaster so far.