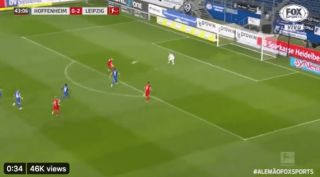 Chelsea fans should probably look away now after their summer target, Timo Werner, missed an absolute sitter for RB Leipzig against Hoffenheim.

Tipped as one of European football’s hottest properties, Werner looked anything but as he was played in for what appeared to be the simplest chance.

With only the keeper to beat and no defenders within a few yards of him, the centre-forward inexplicably lofted the ball high and wide when it would’ve been easier to score.

You can watch the footage below, courtesy of Fox Sports.