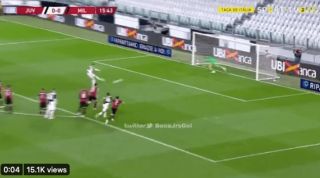 It’s not often that Cristiano Ronaldo misses the target from 12 yards, but that’s exactly what happened in the second leg of the Coppa Italia fixture between Juventus and AC Milan.

Just 16 minutes into the match, the Portuguese was given the chance to put the Bianconeri ahead in the tie, but inexplicably fluffed his lines.

Standing with his hands on his hips before the referee blew his whistle, Ronaldo strode up purposefully and confidently but only succeeded in smashing his low drive against the base of the post.

You can watch the footage below, courtesy of ESPN and BT Sport.

A WILD turn of events in the Coppa Italia!

– Cristiano Ronaldo misses a penalty
– Ante Rebic is sent off

An absolutely crazy minute in the #CoppaItalia! ?

Cristiano Ronaldo hits the post from the penalty spot…