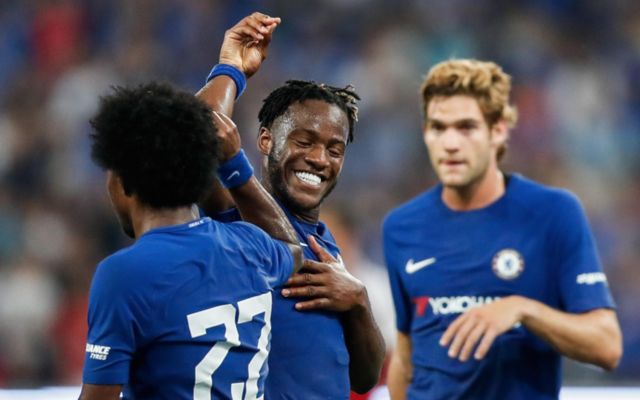 Chelsea boss Frank Lampard has snubbed Blues flop Michy Batshuayi in the club’s two recent friendlies, which could signal the end of the Belgian forward’s career at Stamford Bridge, according to the Daily Star via the Athletic.

It’s been reported that the Belgian forward only played the final third of an intra-squad friendly, to make matters worse the enigmatic ace was completely left out of a warm-up match against Reading.

Batshuayi has struggled at Chelsea with just 25 goals and six assists in 77 appearances for the Blues in his four-year stint at Stamford Bridge.

The striker has been experienced three loan spells during his time with the Blues, he’s been sent out to Borussia Dortmund, Valencia and Crystal Palace.

Now, Lampard is prepared to axe the striker with the club reportedly keen on getting his £110,000-a-week wages off their books.

Meanwhile, Lampard has gone ahead and handed Olivier Giroud a one-year extension and it is widely thought that the Frenchman will provide back up to Tammy Abraham, which also further hints at Lampard losing faith in Batshuayi.

Lampard didn’t name the Belgian in his side for both the club’s recent friendlies ahead of the resumption of the Premier League and Chelsea are expected to sell the striker this summer with West Ham, Crystal Palace and Newcastle keen on signing the forward.

According to an earlier report in the Sun, the Blues are to demand a fee in the region of £40m for the Belgian forward who definitely looks like he could be on his way out at Stamford Bridge.