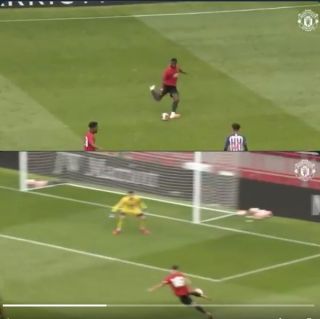 Fans have got their first taste of Paul Pogba linking up with Bruno Fernandes in Manchester United’s recent friendly against West Brom.

There has been much talk of Pogba linking up with the Portuguese midfielder Fernandes with fans and former players alike waiting to watch the pair in action together for the Red Devils.

Now, as seen in the tweets below, the first footage of the duo in action together for Man United has emerged.

The first video shows Pogba firing a diagonal ball over the top of the defence which was met on the volley by Bruno Fernandes, who could only find the side netting.

While the second video shows the reverse with Fernandes putting in a cross that Pogba met with a header that just missed the goal and sailed over the bar.

The first in-game footage of Pogba and Bruno linking up ? pic.twitter.com/PsmRDvpIqv

While both players failed to score, it is surely great news for United fans that the pair are already linking up and finding each other on the pitch and it will certainly be an exciting prospect for fans to watch the duo in action when the Premier League resumes next week.