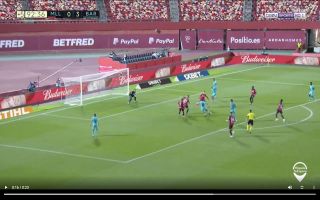 Lionel Messi completed a rout for Barcelona against relegation candidates Mallorca this evening, with a late goal in the 93rd minute of the La Liga encounter.

Promising centre-back Ronald Araujo, who was playing just his second senior game for the Catalan outfit, sparked an attacking opportunity with a brilliant pass from the back into compatriot Luis Suarez.

Suarez charged forward before laying the ball off to Messi, he skipped past one defender, and after creating some space from another he fired the ball into the top corner with his right-foot.

Messi’s goal rounds completes a comfortable performance for the superstar, the 32-year-old also grabbed two assists tonight, here’s the one to Braithwaite and here’s the star teeing up Jordi Alba.

Take a look at the six-time Ballon d’Or winner’s fine strike below:

Leo Messi scores to put the finishing touches on a 4-0 Barca win ?

He left it late but he was always going to score! ? pic.twitter.com/C5CakEho3A

Barcelona proved to be clinical tonight and they showed that their free-flowing attacking football is getting back to its best in their first game after a three-month layoff.