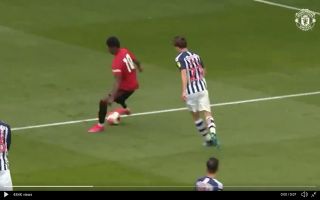 During one of yesterday’s friendlies between Manchester United and West Bromwich Albion, Marcus Rashford pulled off a sensational piece of skill.

With Rashford’s back facing West Brom youngster Jack Fitzwater in the box, the England international got past his man after a superb piece of skill that we don’t even think has a name.

The best way to describe the trickery would be as a 180-degree roulette of sorts, Rashford then played a low cross into the middle of the box, which was gathered by Ex-Red Devils ace Sam Johnstone.

Rashford pulled off the insane bit of dribbling in the first of two 60-minute friendlies against the Baggies, as per the Star, United lost the match Rashford played 2-1 but won the second fixture 3-1.

Take a look at the star’s moment of magic below:

Now you see him, now you don’t ? @MarcusRashford pic.twitter.com/VCenOgWVKE

This skill from Marcus Rashford though ?

Rashford was enjoying the best season of his professional career before he was hit with a long-term injury in January, it would be great to see the 22-year-old pick up where he left off when football returns.