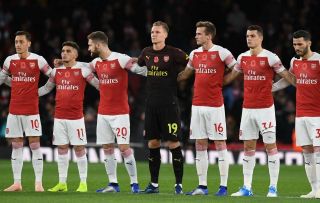 Arsenal goalkeeper Bernd Leno has spoken out about Timo Werner’s impending move to Chelsea, according to a recent report in the Daily Mirror.

The Gunners goalkeeper has high regards for his fellow Germany international and has spoken out about how he will strengthen Arsenal’s London rivals, Chelsea.

Werner is expected to complete his move to West London to sign for Chelsea from RB Leipzig for a fee of £53m and will earn weekly wages in the region of £200,000-a-week once.

Now, Werner’s Germany teammate and Arsenal number one Bernd Leno has spoken out about Werner’s move to Chelsea, Leno has welcomed the star forward to the Premier League.

Speaking to Sky Sports Germany about Werner’s impending move to Chelsea, as cited in the Mirror, Leno said:

“I get on very well with Timo. He is very welcome in London,”

“I would be happy for him, Chelsea is a great choice, no question about it.”

“The Premier League is faster, more physical. But I think he’s good for it. Timo is an extremely fast player.”

“With his qualities and killer instinct, I’m afraid I have to say, he could be reinforcing Chelsea,”

Leno’s comments on Werner come as no surprise given the German forward’s ability and skillset and the Leipzig ace will surely add more quality to Frank Lampard’s side with his speed, finishing and goal threat from out wide.

All that’s left now is for Chelsea to officially announce the signing of Werner with the German ace in line to become an important member of Lampard’s squad come next season.