According to Football Insider, Chelsea are interested in a summer swoop for Southampton ace Fraser Forster as they look to add at least one new goalkeeper in the next transfer window.

Football Insider claim that Southampton are open to offers for the ace, who is currently on loan at Celtic – which is his fourth spell with the Scottish giants. It’s added that Forster is valued at around £10m.

The report reiterates that the 32-year-old isn’t being earmarked as a potential starter for the Blues, but rather a backup option.

Frank Lampard’s side need to bolster between the sticks following the unflattering performances of 2018’s marquee signing Kepa Arrizabalaga this season.

Current backup Willy Caballero is 38 years old so the west London outfit would be wise to add another goalkeeper to their ranks to ensure that the battle for the starting spot is as competitive as possible.

Chelsea supporters will be pleased to know that Forster is actually one of just 8 goalkeepers to win the Premier League Player of the Month award, the ace achieved the feat in February 2016.

That award is more impressive looking back as Forster is the last stopper to win this award in the top-flight League, even the likes of Alisson, Ederson and David de Gea haven’t won this in the last four years. 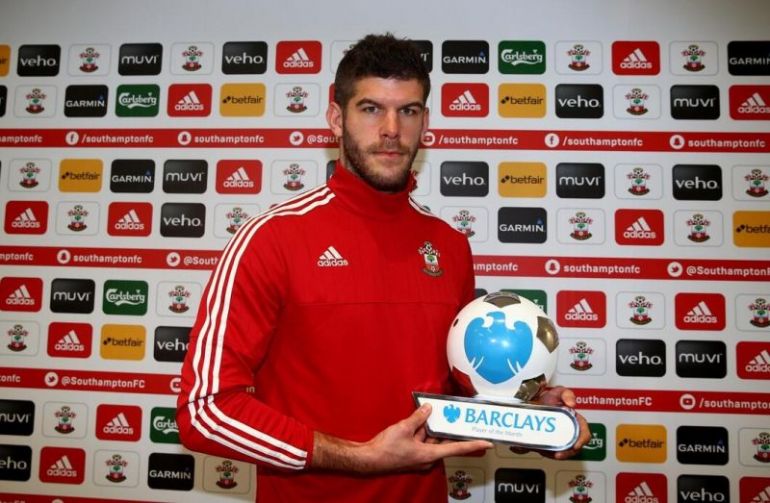 Forster with his Premier League Player of the Month award.

The last couple of years haven’t been as impressive for Forster, he lost his starting spot for the Saints to Alex McCarthy in 2017/18 and then slipped down to third-choice when Angus Gunn joined soon after.

A move back up to the Highlands has reignited Forster though, he’s kept 14 clean sheets in 28 league outings this term, he also turned in a superb performance in the Scottish League Cup final vs Rangers.

With Forster boasting 107 Premier League appearances to his name, there’s no doubt that he could make a solid backup option for a top club like the Blues.

Chelsea could yet face a battle to secure Forster’s signature as Football Insider claim that Celtic remain keen on re-signing the stopper permanently, while the Mirror report that Arsenal are also keen.

Forster’s massive 6ft7 frame would also give Chelsea a different type of stopper between the sticks in comparison to the slight-framed Kepa.

Forster fits the traditional goalkeeper mould, whereas Kepa is modern, however this style – which comes with ball-playing tendencies, has seen the Spaniard make quite a few costly errors this season.