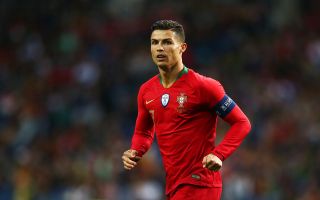 Portuguese superstar Cristiano Ronaldo has revealed his diet and training regime that helps him stay fit even beyond the age of 30 as a footballer, according to a recent report in the Sun.

The Juventus forward is renowned for being in top shape and in impeccable condition through his entire career and now the superstar has revealed how he stays fit playing at the top level of European football despite being a 35-year-old.

However, the superstar has revealed that he enjoys the occasional cheat meal of gorging on pizza with his son.

Speaking to YouTube channel ChrisMD about his training and dietary regime, as cited in the Sun, Ronaldo said:

“The key is to take care of your body, train, do your recovery and eat properly.

“Although sometimes I do eat pizza with my son otherwise it would be boring.”

Ronaldo also has a post-match training routine that sees him hit the swimming pool straight after a game and he follows a strict diet along with Pilates-based routines.

But when the Portuguese international first came to Manchester United as an 18-year-old he was extremely skinny but remained focused on putting on muscle.

Speaking about being labelled ‘skinny’ early on in his career, Ronaldo said:

“So I made a decision at 11 years old, I knew I had a lot of talent, but I decided that I was going to work harder than everybody.

“I started sneaking out of the dormitory at night to go work out. I got bigger and faster.

“I would walk on to the field, and the people who used to whisper, ‘Yeah, but he’s so skinny,’ now they would be looking at me like it was the end of the world.”

The Portuguese icon further highlighted how drills can help anybody stay fit.

“We do a lot of sprinting drills in training and they can be incorporated into your workout whether you are in the gym or outdoors.

“Try and add it to every workout you do. Fit in exercise wherever you can.

“You can do an abs workout in your bedroom when you wake up in the morning or before you go to bed.

“If you get into a routine then it makes it easier as it will become a habit.”

While elaborating on his diet, Ronaldo added:

“I eat a high protein diet, with lots of wholegrain carbs, fruit and vegetables, and avoid sugary food.

“Eat regularly. If you train regularly it’s important to keep energy levels high to fuel your body for better performance.

“I sometimes eat up to six smaller meals a day to make sure I have enough energy to perform each session at top level.”

It’s certain that Ronaldo’s fitness regime has seen him continue playing at the highest level in Europe despite his advancing age.

The Portuguese superstar wants to carry on playing even in his 40s and with his determination, he could go on to do so before he eventually retires.