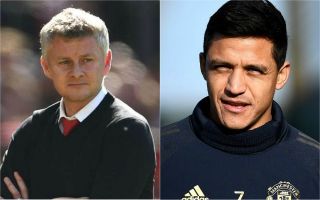 Manchester United manager Ole Gunnar Solskjaer could reportedly have a new role in mind for Alexis Sanchez next season.

According to a surprise report from the Daily Mirror, the Red Devils boss could end up bringing Sanchez back into his squad as a backup player so he doesn’t block the progress of young forwards like Mason Greenwood.

MORE: Mourinho has been taking private digs at Solskjaer ahead of Tottenham vs Man United clash

United fans will not be too eager to see Sanchez in action for them again any time soon after his struggles at Old Trafford, but the Mirror suggest the club are going to struggle to offload him any time soon.

The Chile international has been on loan at Inter Milan this season but has been similarly poor in his time in Serie A, so a return to Man Utd looks to be on the cards.

Solskjaer may just have to make the best of it and use Sanchez as a squad player next season, which might not be so bad if he isn’t relied upon too often.

MUFC signed Sanchez from Arsenal in January 2018 in what was a keenly-anticipated deal for a player who, at the time, was one of the finest in Europe.

Now, however, the 31-year-old will likely go down as one of United’s worst signings of recent history.