There still seems to be hilarity among coaching staff when they pick up a yellow card for their antics, but it’s a nonsense if any player manages to get booked while not on the pitch.

Premier League fans will remember Fenerbahce legend Emre Belozoglu from his time at Newcastle, and we’ve seen over the years that he’s not afraid to share his opinions.

He was on the receiving end of that famous tackle from Didier Zokora after he took things into his own hands following racist abuse from the midfielder, but clearly he hasn’t learned to keep his mouth shut.

He managed the spectacular feat of being sent off from the bench in their loss to Trabzonspor earlier today:

On loan Crystal Palace striker Alexander Sorloth does a glorious job of winding him up, and Emre does all the rest by refusing to shut up and managed to get sent off before he even reaches the field. 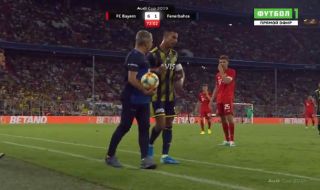 Video: Bizarre scenes as Fenerbahce star tries to walk off pitch after being booed by his own fans, before being forced back on July 31, 2019 10:37