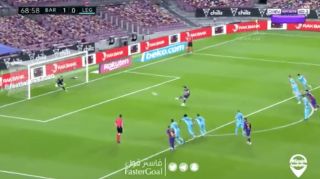 Cometh the hour, cometh the man, and Barcelona will be indebted to their captain, Lionel Messi, for taking what was becoming a tricky assignment against Leganes away from their visitors.

After having had an Antoine Griezmann goal ruled out for offside shortly before, Messi was buffeted to the ground and this time the VAR check went in Barca’s favour.

Though he’s proved he’s human by missing from the penalty spot before now, there was little doubt he would score Barca’s second on the night when he put his foot right through the ball, sending the keeper the wrong way.

You can watch what was his 699th goal for Barca below, courtesy of footage from BeIN Sports.