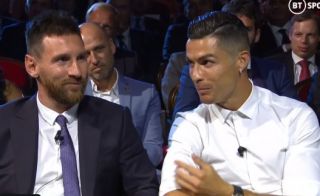 With La Liga already having been restarted last weekend, it has given Lionel Messi the opportunity to cement his Spanish top-flight legacy even further.

In the two games that Barcelona have played so far since the resumption – the 4-0 win at Mallorca and the 2-0 victory over Leganes – the Argentinian has found the net once on each occasion.

The second of those, against the Madrid-based side, was his 699th goal for the Catalans, but it also edged him closer to another record.

Messi won, and converted, a penalty, which took him to 56 successful spot-kicks in La Liga. Sport note that this puts him second on the all-time list, tying with Real Madrid legend, Hugo Sanchez.

However, it’s another Los Blancos superstar that he has in his sights now. His nemesis, Cristiano Ronaldo.

The Portuguese managed to convert 61 penalties during his time in Spain, according to Sport, meaning Messi needs to score just another six from 12 yards to see his name up in lights yet again.

The goal was also his 21st of the season, per Sport, giving him a decent lead in the race for the ‘Pichichi’ top scorer trophy in 2019/20.

He jointly holds the record of six with Athletic Club’s Telmo Zarra, meaning that this record could fall by the end of the campaign too.