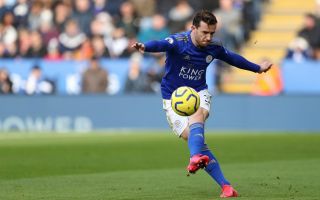 It’s important for any club that they don’t sell anyone unless they have a succession plan in place.

That may change if someone offers a ridiculous amount for someone, but it sounds like a key reason why Leicester don’t want to sell Ben Chilwell this summer.

A report from Sky Sports has linked him with Chelsea, but they indicate that Leicester don’t want to sell him, even if they are offered £50m.

Left back has been a weakness for Frank Lampard this season and it’s understandable that they would be interested, but the report points out that it would immediately become a weakness for Leicester if they allowed him to go.

Current back-up Christian Fuchs is set to be out of contract this summer and it sounds like he might want to return to Austria, even though Brendan Rodgers wants him to stay.

After him they do have England U18 international Luke Thomas who looks promising, but the report states that Brendan Rodgers doesn’t think he’s ready to play regular first team football just yet.

On top of that they point out that Chilwell still has four years left on his deal so it’s unlikely that they will be forced into selling him, and all of this makes it likely that Chelsea will miss out on him for now.