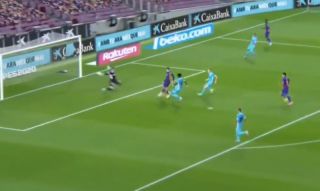 Barcelona weren’t finding things all their own way against Leganes on Tuesday evening, but when Antoine Griezmann slotted home, it looked as though a second goal for the Catalans had taken the game away from La Liga’s bottom side.

However, after a quick VAR check, the goal was ruled out because of an offside on Nelson Semedo, who had provided the assist for the Frenchman.

It was an unfortunate, but completely correct, intervention for the hosts, as Griezmann had been quiet to that point and it was a fine slotted finish.

Griezmann has not enjoyed the most memorable debut season at the Nou Camp and he could have done with a bit more luck going his way here.