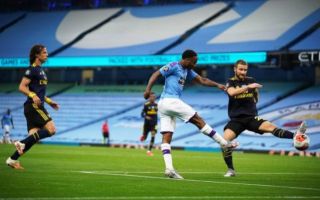 Manchester City absolutely battered Arsenal last night, with the Gunners putting in another worryingly poor performance in a big game against a top six side.

Arsenal goalkeeper Bernd Leno had a busy night, and was one of only a few of the north Londoners’ players to emerge from the game with any real credit.

Remarkably, Arsenal have been totally outplayed by City over their two Premier League matches this season, as this brutal stat from Opta’s David Wall shows…

There were 20 shots on target in the two league games between Man City & Arsenal this season.

Over both fixtures, Arsenal had just one shot on target compared to 19 from City, who will feel they really could’ve scored more than just the three in each game.

Despite some improvement since Mikel Arteta replaced Unai Emery as manager, it’s clear there is still plenty of work for the inexperienced Spanish tactician to do at the Emirates Stadium.