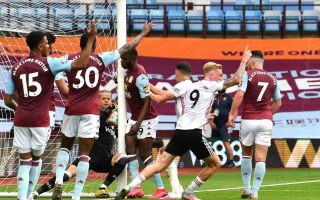 The visitors were denied a clear goal due to a failure in goal-line technology, with referee Michael Oliver never receiving the notification that he should have done when the ball clearly crossed the line.

Hackett believes referees need to be using the pitch-side monitors more and that a new action plan needs to be discussed after this blunder.

“I was the boss of PGMOL that stood up at a summer conference of the Premier League and when asked what new innovation would I introduce to help referees. I said without hesitation Goal Line Technology,” Hackett told CaughtOffside.

“Six years later having worked with Hawkeye and having convinced the lawmakers the IFAB it was introduced.

“In the game between Aston Villa v Sheffield United we witnessed a system failure. The seven high speed cameras surrounding the goal at various angles capture the outer circumference of the ball with the signals passing through a software programme. It computes the speed and distance of the ball and if it is working sends a signal directly to the watch on the referees wrist.

“Referee Oliver looked at his watch and did not receive a signal. He might then have expected a vigilant VAR to intervene and suggest a review.

“Sadly technology failed Hawkeye claiming that the view was blocked by the goalkeeper shielding the ball and the goal post also in the way.

“The PGMOL have only had the referee visit the pitch-side monitor once season to date. This was an opportunity that should have been taken, it was not.

“Premier League and PGMOL must sit down with Hawkeye and review this massive error that had an outcome in the result of the game.”

You can see the bizarre incident again below, and it really is inexcusable to see a team denied what could have been such an important goal at this high level…