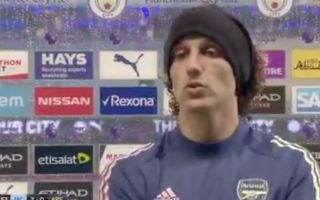 Arsenal defender David Luiz made a big claim about his contract situation after a disastrous performance in his side’s 3-0 defeat to Manchester City last night.

The Gunners were thrashed by City as the Premier League resumed after a three-month suspension due to the coronavirus pandemic, with Luiz having an absolute nightmare at the Etihad Stadium.

The Brazilian was at fault for the first goal scored by Raheem Sterling, and then later conceded a penalty and got himself sent off as Mikel Arteta’s side suffered a heavy defeat.

Arsenal could really have done without this as they looked to take advantage of the break to get a little more used to new manager Arteta, who has done a promising job since replacing Unai Emery.

This was a major setback, however, and Luiz took the blame afterwards, suggesting that he should have made a different decision over his future.

The 33-year-old’s situation is a little unclear, with the Daily Mirror recently claiming he could be offered a new contract by AFC, though this is yet to materialise.

Speaking to Sky Sports after the game, as quoted by the Daily Star, Luiz said: “It [defeat to Manchester City] was not the team’s fault, it was my fault.

“I take the decision to play, I should take another decision the last two months and I didn’t.

“Today, the team played well, especially after with the ten men. The coach is amazing. All the players did amazing, it’s just my fault.

“I should have taken a different decision in the last two months and I didn’t. It was all about my contract, if I stay here or not.

“I have 14 days to be here. That’s it. Today was my fault. I should have tried to decide my future as early as possible but I didn’t.”

It’s not entirely clear if Luiz is suggesting he should have simply left Arsenal, or if he should not have played without resolving his contract situation.

Either way, it’s brutally honest from the former Chelsea man, who did not shy away from taking responsibility and seemingly admitting his head wasn’t quite in the right place for this game.