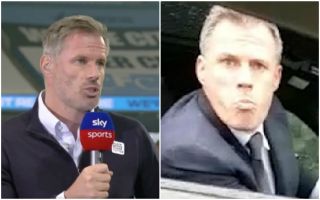 Silvestre clearly wasn’t a fan of Carragher blasting Luiz after a performance which saw the defender make two costly mistakes.

Carragher said ‘I don’t think we’ll shim in the Premier League ever again’ whilst also joking that Luiz’s defensive errors provide ‘us with entertainment’.

Silvestre then savagely took to Twitter to voice his concern that Carragher is allowed on screen after he ‘spat at football fans’, adding that now the retired England international is spitting at footballers.

The incident that Silvestre mentioned occurred two years ago, Carragher was filmed spitting towards a Manchester United fan’s 14-year-old daughter after the Red Devils beat Liverpool 2-1.

We all thought the same after he spat at football fans but he is back … spiting at football players ! ?????? #jamiecarramity https://t.co/UtShJyKjCO

It’s fair to say that we probably won’t be seeing Silvestre as a pundit on Sky Sports anytime soon.