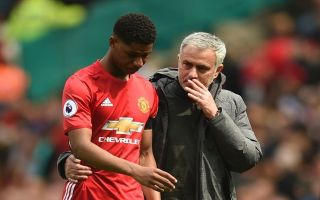 Ahead of the game, the Portuguese has taken the time to praise the United striker for his work off of the pitch, particularly relating to getting the government to perform a u-turn on their decision not to extend a food voucher scheme to those most vulnerable families in society.

“He did amazingly well, I congratulate him for that,” Mourinho exclusively told talkSPORT in relation to Rashford’s efforts.

“It’s a bit strange for me that one football player can make it happen – if it happened then that means the government thinks it’s the right thing to do. They shouldn’t wait for one player to publicly put pressure on for that to happen.

“The 18-year-old that I met a few years ago is now a man and a man with principles to fight for kids very similar to him when he was a kid. That is something very, very nice from Marcus.”

It’s not just off of the pitch where Rashford sets the example of course.

After having recovered from his back injury, the England international is likely to be champing at the bit to get amongst the goals again.

With Bruno Fernandes expected to pull the strings in midfield, if United can find the form that they were enjoying pre-lockdown, it’ll be a long 90 minutes for the hosts.

However, Mourinho does have the luxury of his own fit striker back in the starting line-up.

Rashford’s international strike partner, Harry Kane, has also been a long-term absentee, and we can be assured that he’ll be doing his best to find the net too.