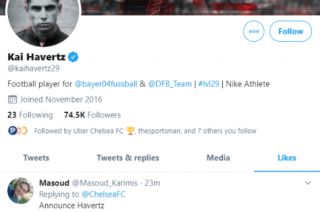 Chelsea supporters are beside themselves after Bayer Leverkusen wunderkind, Kai Havertz, dropped the biggest hint yet that he’s about to join the Stamford Bridge outfit.

After Twitter user @Masoud_Karimis had answered the official Chelsea account with an ‘Announce Havertz’ plea, the striker himself liked the response.

Coming so soon after he’d liked an Instagram post, detailed by CaughtOffside, that revealed his international team-mate, Timo Werner, had officially signed with the west London outfit, it sent Blues supporters into a Twitter meltdown.

‘It’s happening,’ said one, with another simply commenting; ‘He liked it OMGGGGG.’

It’s easy to understand why they’re so excited of course. In 28 Bundesliga games this season, the 21-year-old has scored 12 goals, per transfermarkt, and has looked a consistent threat in every game he’s played.

Sportbuzzer had noted Chelsea’s interest in an exclusive report which also suggested that Spanish giants, Real Madrid and Barcelona were keen to acquire his services.

However, if Havertz’s social media hints are anything to get by, then the Premier League and not La Liga will be his next destination – and these fans couldn’t be more delighted.

He liked it OMGGGGGG

He actually liked it wtf ?

Thank you for your services, agent Masoud.