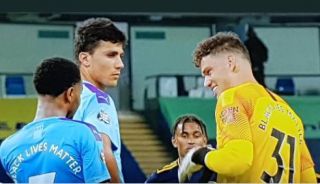 Manchester City goalkeeper Ederson has been slammed by a number of fans on Twitter for his reaction to his clash with team-mate Eric Garcia last night.

The Brazil international came rushing out of his goal and absolutely clattered Garcia, leaving him requiring attention on the pitch for what looked a pretty bad injury.

Bizarrely, Ederson didn’t seem particularly bothered about what had just taken place, and many fans criticised him for not checking up on Garcia at all, and for being seen joking and laughing with some of his other team-mates just moments later.

This does seem rather odd from Ederson, as you’d think most players would be concerned if their young team-mate was down on the pitch getting treatment for such a long time.

The 26-year-old is undoubtedly a fine player and has been a big part of City’s recent success, but we’re not surprised to see some strong reaction to this rather unsavoury incident in last night’s game…

Why has Ederson not checked on his team-mate after that, the psycho?!

Wtf is Ederson smiling must be what's running through rodri head #MCIARS pic.twitter.com/QqrT6YcMmt

Ederson a proper weirdo for not apologizing or checking on Garcia once. Hardly even acknowledges him and doesn’t look upset at all. If anything just seems annoyed the game has stopped. Mane was really ahead of his time

Man city are kinda tapped still. Ederson punches his own team mate. Doesnt even go to him and check on him. Then 2 mins later hes there laughing with Sterling. Pep doesnt even look at him when eric garcia is going past him in a stretcher. Clowns ????? #MCIARS

That looked bad on Garcia. Yet Ederson was laughing and Pep didn't even give a glance? Wtf is wrong with you people pic.twitter.com/YX4GKMUcSh

Ederson is abit of a weirdo aint he

I'm sorry but as much as I love Ederson he has to go check on and be with Eric Garcia there. Guardiola didn't even look at him as he went past on a stretcher with an oxygen mask on! He's 19 years old and in a seemingly bad bad condition. Not happy with my Gk and manager there ?

Absolutely no sportsmanship shown by Ederson after knocking out Garcia, like wtf! and Pep didn't even bother as well when Garcia was wheeled past him ? these peeps ain't human after all ????

Tbh I want hear more from Ederson. He just attempted to murder his teammate live on TV then was laughing about it. What a psycho.

wtf is wrong with ederson pic.twitter.com/RIrPhGGhWv

Ederson’s a nutter isn’t he – takes his team-mate clean out (no need to come for the ball either) and doesn’t really bother checking to see if he’s okay ????? #MCIARS

WTF is Ederson up to? 2-0 up, no real danger, absolutely mullers his own player, doesn't check he's OK and then laughs his tits off whilst he's receiving treatment! Hopefully Garcia is OK ?? https://t.co/tKdB67OWlw

Ederson and Garcia must not get on, the way he ploughed through him and then didn’t even go to check straight away#MCIARS

How come Ederson was laughing after sending Eric Garcia to the shadow realm? That was a scary situation his teammate was down and motionless and he’s laughing….??