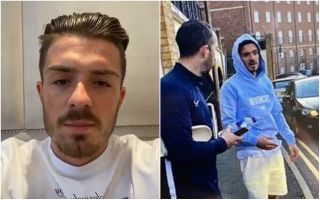 Although Premier League football returned on Wednesday evening, giving Aston Villa’s Jack Grealish something to look forward to, the Man United target was reminded of his poor judgment during lockdown after being charged with three offences on Thursday pertaining to the car crash he was involved in back in March.

The Daily Star note that the charges of driving without due care and attention, and failing to stop at or report a collision, mean that the 24-year-old will now have to appear in court on August 25 to face the charges.

The Manchester Evening News reported United’s interest in the player back in May, but with possible criminal charges hanging over him, the Red Devils may have to think twice about a potential £80m bid.

“A Premier League footballer has been charged with driving without due care and attention, and failing to stop at or report a collision,” a statement from West Midlands Police read.

“Jack Grealish is accused of the offences in Waterside, Dickens Heath, Solihull, on Sunday 29 March.

“An investigation was launched after we responded to reports of a car hitting parked vehicles and the driver fleeing on foot.

“The 24-year-old from Barnt Green, Worcestershire, has been postal charged to appear before Birmingham Magistrates Court on 25 August.”

From a footballing perspective, there’s little doubt that Grealish would shake up Man United’s midfield.

His marauding runs from deep have been a feature of Aston Villa’s play over the campaign, and his energy, enthusiasm and willingness to put in a shift in every game will quickly endear him to the Old Trafford faithful – as long as Ole Gunnar Solskjaer is still willing to open the purse strings.