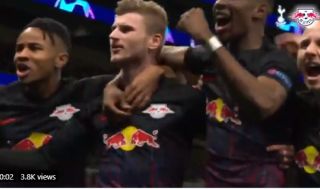 Chelsea fans will love RB Leipzig’s tweet poking fun at Tottenham after Timo Werner’s goal against them in the Champions League this season.

See below as Leipzig showed Chelsea fans why they think Werner could be a hit at Stamford Bridge, due to having already shown he can hurt their London rivals Spurs…

MORE: Why Chelsea were more willing than Liverpool to spend big on Timo Werner transfer

We're sure Timo will fit in well at the Bridge, he already knows how to score against Spurs ?

The Germany international has been a top performer for Leipzig and it will be interesting to see how he gets on at Chelsea.

Tottenham fans probably won’t be too keen on coming up against him next season, and it’ll be interesting to see if the north Londoners respond to this cheeky social media jibe.