Norwich had the chance to build some momentum to spark a late escape from relegation, but those hopes have seriously dented after Southampton were clinical in a 3-0 victory.

Daniel Farke’s possession-focused style was undone against Ralph Hasenhuttl’s men – who looked dangerous on the counter-attack for the entire 90 minutes.

Subs: 62′ Hernandez for Cantwell and Vrancic for Trybull, 80′ Idah for Pukki and Duda for Buendia, 89′ Martin for Drmic.

Subs: 82′ Adams for Obafemi and Smallbone for Armstrong, 88′ Tella for Ings, 90′ Boufal for Redmond and Walker-Peters for Valery.

The first-half of the encounter only saw one clear-cut chance, Norwich dominated possession for most of the opening 45 minutes but failed to use this to their advantage.

Southampton looked threatening on the counter-attack, something that Norwich should’ve paid attention to as it came back to bite them later.

The best chance of the opening period fell to Danny Ings in the 34th minute, Jack Stephens won the ball on the halfway line and charged forward before slipping the ball into the talisman.

It didn’t take the Saints long at all to open the scoring once the second-half started, with Ings firing the costal outfit ahead in the 49th minute.

After Norwich failed to deal with a throw-in, Stuart Armstrong tapped the ball into Ings’ path and the England international curled the ball into the top corner with a lovely first-time finish.

Take a look at Ings’ 16 league goal of the season:

What a finish from Danny Ings! ?

He's having some season…?

Hasenhuttl’s men proved their potent threat on the counter just a few minutes later, Nathan Redmond spearheaded the break and charged forward before playing the ball into Ings.

Ings laid the ball off to Armstrong and the Scotland international effortlessly glided past three Norwich defenders before drilling the ball into the bottom corner. Krul had no chance of stopping this.

In the 63rd minute of the clash, Pukki had the chance to get the Canaries back into the tie, but his close-range effort was blocked.

Southampton put the final nail into Norwich’s coffin in the 79th minute. Ings found some space near the halfway line before playing Michael Obafemi in with a perfectly weighted pass.

Just like the other two goals, Obafemi got past Norwich’s defenders with far too much ease before teeing up Redmond on the edge of the box, the winger hammered the ball into the net with a low finish.

Southampton have just been so clinical on the counter-attack! ?@9smudge isn't too impressed with the Norwich defending, though…? 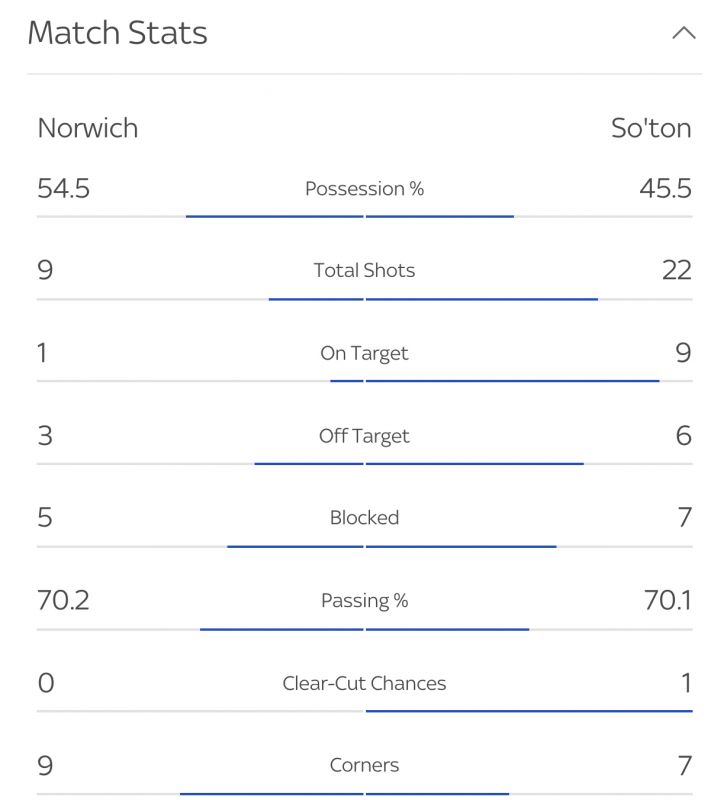 Norwich were just far too suspect in defence to take anything away from this game, the Canaries also struggled to convert their possession advantage into clear-cut chances.

Southampton played some beautiful counter-attacking football, the front four of Armstrong, Redmond, Ings and Obafemi were lively for the entire clash and their work-rate paid off in a comfortable win.

My Man of the Match award would go to any of these attackers, Ings will likely take the most plaudits given he’s got the highest profile, but any of the attacking quarter deserve this honour.

With Norwich rock bottom and six points from safety, it seems very unlikely that the Canaries will mastermind a late uplift in form that will inspire them to beat the drop.

Southampton sit 13th after the victory, the Saints could push for a spot in the top 10 if they continue to play clinical football like they displayed today.