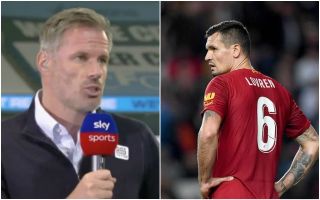 This entire conflict has started with David Luiz, the Brazilian’s dismal performance in Arsenal’s defeat to Manchester City led to Carragher brutally criticising the star.

Former Manchester United and Arsenal defender Mikael Silvestre then jumped to Luiz’s defence by putting Carragher on blast for the spitting saga he was involved in.

The incident that Silvestre mentioned occurred two years ago, Carragher was filmed spitting towards a Manchester United fan’s 14-year-old daughter after the Red Devils beat Liverpool 2-1.

Lovren has now liked Silvestre’s tweet which suggests that Carragher is now spitting at fellow footballers, what a bizarre turn of events that involves some of England’s biggest clubs.

Take a look at Lovren’s social media activity below:

Credit to the guy.

He always manages to find a new way of pissing off his own club’s fans ??? pic.twitter.com/ZnmYU9hjfn

Lovren’s liking of this tweet indicates that the Croatian isn’t a fan of the former Anfield great, perhaps due to Carragher’s criticism of the ace in the past.

It says it all about Lovren’s apparent hate for Carragher if he’s engaging with a tweet from a former player of sworn rivals United.