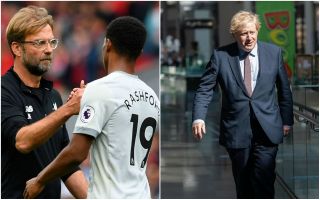 During today’s pre-match press conference ahead of Liverpool’s first match back against rivals Everton, Jurgen Klopp has taken a moment to praise the brilliant work of Man United’s Marcus Rashford.

The German admitted that he couldn’t ‘respect’ Rashford’s work for a wonderful cause any more, adding that the Red Devils star’s fight for the underprivileged was ‘incredible’.

According to the Mirror, Rashford’s work over the last few weeks has led to the government extending food vouchers worth £15 per child for the entirety of the summer holidays.

Rashford using his platform for this cause has led to the government pledging an extra £120m to ensure that no children go hungry during these challenging times for families across England.

Jürgen Klopp: "I'm proud of the players, but not surprised they've helped during a difficult time because they do a lot of things without talking about it. What Marcus Rashford has done – I couldn't respect it more. It's a shame he had to do it, but it was incredible."

It goes without saying that club rivalries should be put aside to hail things like this, Liverpool also showed their class with some brilliant social media posts aimed at the United star a few days ago.

Klopp’s ‘it’s a shame he had to do it’ comments are the most telling of his statement, it’s disgusting to see the way some footballers are treated considering the fine work they done for the community.

Hopefully, players can follow Rashford’s example by starting to make some of their charitable work more public, this way they can inspire some real change nationwide like Rashford has.