According to the Metro, Arsenal boss Mikel Arteta has hailed Eddie Nketiah as ‘extraordinary’ after the ace’s performance in the Gunners’ 3-0 defeat to Manchester City on Wednesday night.

The academy graduate started at centre-forward for Arsenal in their first game after a three-month layoff due to the Coronavirus pandemic.

Arteta has praised the 21-year-old’s performance in ‘difficult conditions’, whilst urging the starlet to ‘keep doing what he’s doing’ – signalling that Nketiah is on his way to a regular role for the Gunners.

Arsenal were kept quiet in the final third, severely limiting Nketiah’s hopes of making a real splash, the Gunners had just three shots – with none hitting the target.

Nketiah was brought off in the 67th minute of the encounter for Alexandre Lacazette, the talent’s display was certainly encouraging and it seems like it has handed Arteta a selection dilemma. 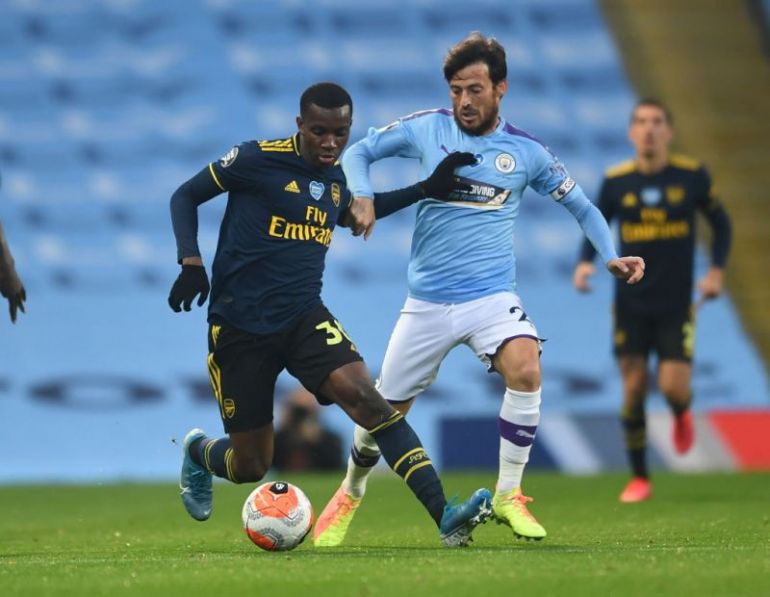 Here’s what Arteta had to say on the England youth international:

“I want him to keep doing what he’s doing,”

“The way he played last night against those players, in those difficult conditions, for me is extraordinary at his age.”

“He has an immense personality to play, confidence, he’s powerful and is developing in every area I think. I have a lot of faith in him.”

“The trick here is to get them with the right environment around them. Not to put too much pressure on them.”

“We have a really young squad, a very inexperienced squad, and when you put that in certain parts of the pitch very close together, you can see that there are some deficits and the decision-making is not always the right thing to do.”

“We are in a position that we have to accept that some things at the moment, in there, probably more than we would like, are going to be like that.”

“That’s the circumstances that we have but at the same time it’s great because it’s a great value for them to have these experiences and see themselves playing against that type of opposition.”

The Gunners’ prime attacking outlet is skipper Pierre-Emerick Aubameyang, however the Gabonese star usually starts on the left-wing and is afforded a free-roam role.

Nketiah has to battle with star Lacazette and fellow exciting talent Gabriel Martinelli for the Arsenal’s centre-forward starting spot.

The ace is certainly a credible option to start ahead of Lacazette after Wednesday’s display, Nketiah has bagged three goals in 8 first-team outings since returning from his loan spell at Leeds in January.