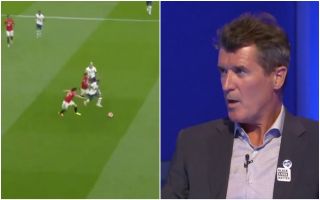 Manchester United great Roy Keane ripped into Harry Maguire when breaking down Steven Bergwijn’s opener for Spurs against the Red Devils this evening.

Keane admitted that he feels ‘staggered’ that Maguire got ‘done like this’, Bergwijn went past the centre-back like he wasn’t even there before scoring.

Maguire appears to have misread what Bergwijn intended to do, the Dutchman just had to knock it past the United captain, he didn’t even need to pull off any extraordinary piece of skill to charge forward.

Here’s some of what Keane had to say:

Take a look at Keane’s half-time tirade in full below:

"I am disgusted with it. Maguire? de Gea? Hang your heads in shame."

"I'd be swinging punches at that guy."

Roy Keane is absolutely FURIOUS at that Tottenham goal…? pic.twitter.com/fC97LLKHcf

Keane claimed later in his rant that Maguire didn’t even deserve a place on the team bus:

“Maguire and De Gea, I wouldn’t even let them on the bus after the match, get a taxi back to Manchester. These are established international players.”

The Irishman then rounded off by adding that Maguire and De Gea should hang their heads in ‘shame’ after their role in the goal:

“Maguire, De Gea – you should hang your heads in shame, representing Man United and letting people run past you, get close to people, move your feet.”

As per BBC Sport, the Red Devils signed Maguire for £80m last summer – making him the world’s most expensive defender ever, the ace has since won the captain’s armband at Old Trafford.

Should Maguire be dropped after today’s performance or is this error being blown out of proportion?