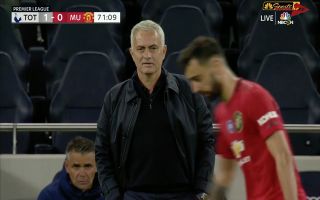 In the 71st minute of tonight’s hotly-anticipated clash between Manchester United and Spurs, Jose Mourinho appeared to say something to his former club’s new employee Bruno Fernandes.

Mourinho smirked and chuckled to himself after looking directly towards Fernandes and saying some words, due to the camera angles it’s unclear whether Bruno also said something in this exchange.

Regardless, the playmaker continued as normal, and unless Mourinho actually said something nice, Bruno made the now Spurs boss pay by equalising for United from the penalty spot just 10 minutes later.

Take a look at the bizarre moment below:

Maybe Mourinho was just praising a fellow icon of Portuguese football, I guess we won’t know unless either lifts the lid on what was said in the coming days.