Superb goals from Craig Dawson and Ben Chilwell came in the last few minutes of Watford’s clash against Leicester, a draw is certainly a fair result after a closely-contested encounter.

In a clash that brings together two managers that used to lead the opposing side in Nigel Pearson and Brendan Rodgers, it wasn’t surprising to see that the sides were so evenly matched.

Subs: 69′ Pereyra off for Welbeck, 77′ Doucoure, Femenia and Capoue off for Mariappa, Cleverley and Chalobah, 88′ Masina off for Holebas.

Subs: 65′ Barnes off for Gray, 76′ Tielemans off for Choudhury, 83′ Albrighton off for Iheanacho.

Leicester dominated the possession in the opening 45 minutes, but there were very few solid chances in the first period of the clash at Vicarage Road.

The Foxes were on the front-foot in the first 20 minutes but the Hornets came into their own from that point onwards.

The clearest chance of the half fell to Abdoulaye Doucoure, the midfielder picked up the ball after Leicester’s almost-costly defensive error near their own box.

The Frenchman fired a low shot towards goal and Kasper Schmeichel dove into action to keep the ball out of the net.

Just before the half-time whistle blew, Leicester experienced another close shave, James Justin put his body on the line to stop a dangerous cross from falling to two Watford attackers who were on hand to put the ball into the back of the net from close-range.

Ismaila Sarr forced a save out of Schmeichel in the 47th minute of the clash, the Dane made himself big as he stopped the Senegalese starlet from scoring after being played in.

In a match which saw two fine performances from the goalkeepers, Ben Foster showed off his superb ability in the 74th minute to keep out a low drilled shot from James Maddison – which came just moments after Marc Albrighton rattled the post with a powerful first-time strike.

England international Ben Chilwell broke the deadlock in the 89th minute with a beautiful strike following an inch-perfect assists from Demarai Gray.

A great strike from the England full-back. Ben Foster didn't have a chance!#PLReturns pic.twitter.com/4NKYvjKgGm 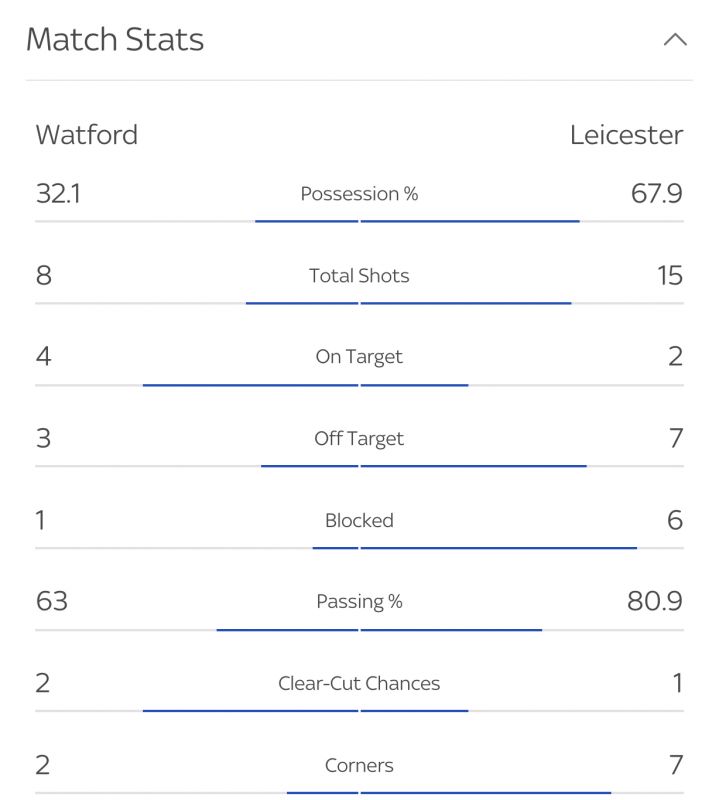 Given Watford’s performance, Pearson’s men certainly deserved at least a share of the spoils this afternoon, they’ve got Dawson to thank for keeping their survival hopes up.

If Chilwell’s strike wasn’t answered, Watford’s morale would’ve taken a massive dip, today’s display and the all-important late leveller give the side some momentum as they hope to remain in the top-flight.

Performing against the league’s third-placed side in such a manner is no easy feat and the Hornets can be very proud of their display today.

Dawson is my pick for the Man of the Match – and not just because of his fine equaliser, the ace was solid as he limited the threat of lightning-fast forward Jamie Vardy, take a look at the defender’s stats here.