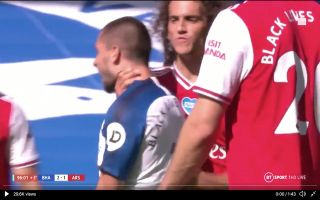 Brighton had already beaten Arsenal 2-1 at the AMEX Stadium, but the bad blood towards match-winner, Neal Maupay, spilled over as Matteo Guendouzi grabbed Maupay around the neck, sending him tumbling to the floor.

The youngster’s reaction may have been as a result of Maupay’s earlier challenge on Gunners keeper, Bernd Leno, forcing the custodian off with a nasty looking knee injury.

Nevertheless, with the game over, Guendouzi’s actions were immature at best and highly dangerous at worst.

It’s not clear if referee Martin Atkinson saw the incident at the time because if he did, there’s no doubt that it will be put in his notebook when submitting his report to the authorities.

Whether or not that is the case, a number of football fans on Twitter are clear that Guendouzi should be banned, and some are even suggesting that he doesn’t play for the Gunners again this season.

It remains to be seen what the Premier League do about it, though looking at the images below it would be a surprise if they didn’t take the swiftest action.

For those watching BT sport broadcasts, and watching them show a slight wack in the stomach as the incident between Guendouzi and Maupay, this is what actually sparked things. When Guendouzi hits out at Maupays throat. Needs a ban for this.

Guendouzi looking for a ban so he doesn’t have to get beat with Arsenal for a while… pic.twitter.com/9BstW0gBSl