Two wonderful first half goals from Luka Milivojevic and Jordan Ayew helped Crystal Palace ease to a deserved win at the Vitality Stadium.

Bournemouth manager, Eddie Howe, can’t have been happy with the way his side, normally so bright themselves, capitulated in a first half completely dominated by the visitors.

Subs: 46’ Wilson off for Groeneveld, 49’ King off for Solanke, 61’ Brooks off for Stanislas

Subs: 66’ Milivojevic off for McCarthy, 76’ Benteke off for Townsend, 89’ McArthur off for Riedewald

Although both sides managed four shots apiece in the opening 45, it was a misleading stat, because the first-half belonged to Roy Hodgson’s Palace side.

Right from the first whistle, the visitors were on the front foot and the only surprise was that it took until the 12th minute for the visitors to open the scoring.

When the opener game, it was very special indeed, Luka Milivojevic smashing home a free-kick off the underside of the crossbar.

As Palace continued to press, with the hosts relatively static in defence, a sweeping move saw Jordan Ayew get a second on 23.

Though Bournemouth stemmed the flow thereafter, due in no small part to some excellent defensive work from Nathan Ake, they offered nothing as an attacking force.

Eddie Howe reacted with a half-time substitution of Harry Wilson, before Joshua King limped out of the game within two minutes of the restart after a shocking challenge from Gary Cahill.

The Cherries afternoon going was from bad to worse, and after a VAR check for serious foul play, Cahill was lucky to stay on the pitch.

In fairness, Bournemouth started to make a game of it, though it would take until just after the hour mark before Ake’s towering header saw their first attempt on target.

As the game entered the latter stages, a congested midfield saw chances become few and far between, and in the end, the visitors were able to ease home. 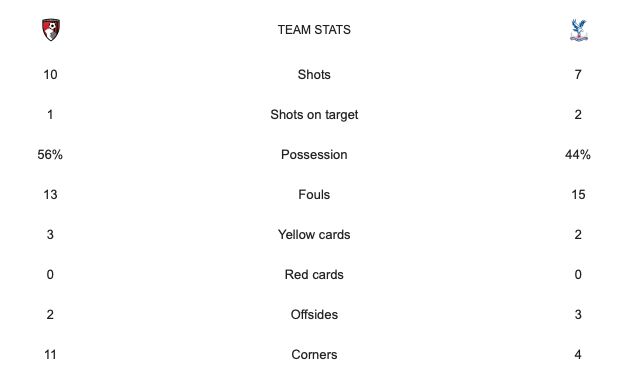 Bournemouth’s loss was their 13th consecutive game without keeping a clean sheet, per transfermarkt.

Though both West Ham and Watford remain within a point, and Brighton are just five ahead, the Cherries’ defensive instability will set them back at this late stage of the season.

By contrast, Palace can bask in mid-table security.

Four wins in a row, and four clean sheets in a row per transfermarkt, means that they can see out the season without pressure, other than that applied from Roy Hodgson who’ll surely want to see his side finish as strongly as possible. 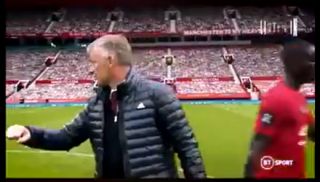