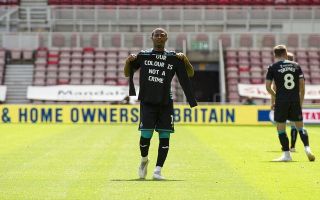 Liverpool starlet Rhian Brewster, unveiled a shirt displaying the powerful anti-racism message ‘Our colour is not a crime’ after scoring for loan club Swansea this afternoon.

The 20-year-old scored a quick-fire double for the Welsh outfit against Middlesbrough, with goals in the 18th and 21st minutes of the Championship clash.

Brewster’s statement comes amid the height of the ‘Black Lives Matter’ movement following widespread injustice for black people across the world.

The England youth international has documented his experiences with racism whilst playing football for the Young Lions on numerous occasions.

"Our colour is not a crime." ?#LFC loanee Rhian Brewster displayed this powerful message after scoring a quick-fire double for Swansea against Middlesborough. ??

English football should be massively grateful for a figure like Brewster, the striker has shed light on racism in sport and society ever since he’s been given a platform due to his talents.

It’s truly wonderful to see such a young man continuously refusing to stay quiet on such serious matters, the ace’s impact off-the-pitch has quickly established Brewster as one of the UK’s leading football figures on the battle against racism, alongside stars like Raheem Sterling, Marcus Rashford and Wilfried Zaha.

In a week where Premier League players have all sported ‘Black Lives Matter’ on the back of their shirts, whilst also taking a knee before kick-off, this gesture equally deserves all the plaudits and attention. 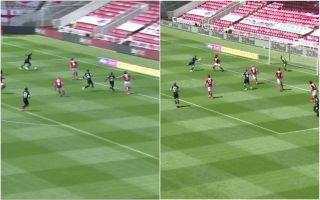