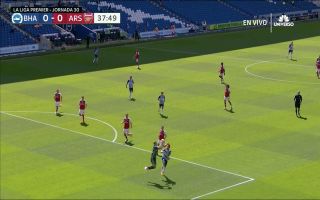 Graham Potter’s side played a long ball up the pitch, Leno came out to claim the ball, but Maupay continued to challenge the stopper, Leno landed awkwardly and was seen clutching his knee.

It’s a shame to see something like this happen on the pitch, both men of course had a fair claim to the ball, Maupay’s intentions didn’t seem malicious at all but they ultimately led to the injury.

Leno has proven to be a solid player for the Gunners since joining a couple of years ago, hopefully the blow to the Germany international isn’t too serious.

Thankfully the ace was conscious after the collision.