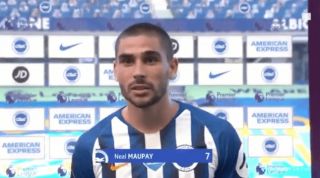 Brighton and Hove Albion match-winner, Neal Maupay, didn’t hold back in his post-match interview suggesting opponents Arsenal got what they deserved.

Maupay had caused some bad feeling when his challenge on Gunners keeper, Bernd Leno, ended with the custodian being stretchered off with what looked like a bad knee injury.

Leno engaged in some finger pointing at Maupay as he left the pitch, and once the game was over, the player was again the centre of attention after being throttled by Arsenal’s Matteo Guendouzi, causing a melee between both sides.

Far from letting things lie, Maupay let Arsenal know just how he felt afterwards, and you can listen to the interview below, footage courtesy of BT Sports.

“I never meant to hurt Leno.”

“Some of the Arsenal players need to learn humility.”

“They got what they deserved.”

? Brighton’s match-winner Neal Maupay catches up with @lynseyhipgrave1 following their 2-1 win over Arsenal at the Amex… #PLReturns pic.twitter.com/6cqakMiqcE